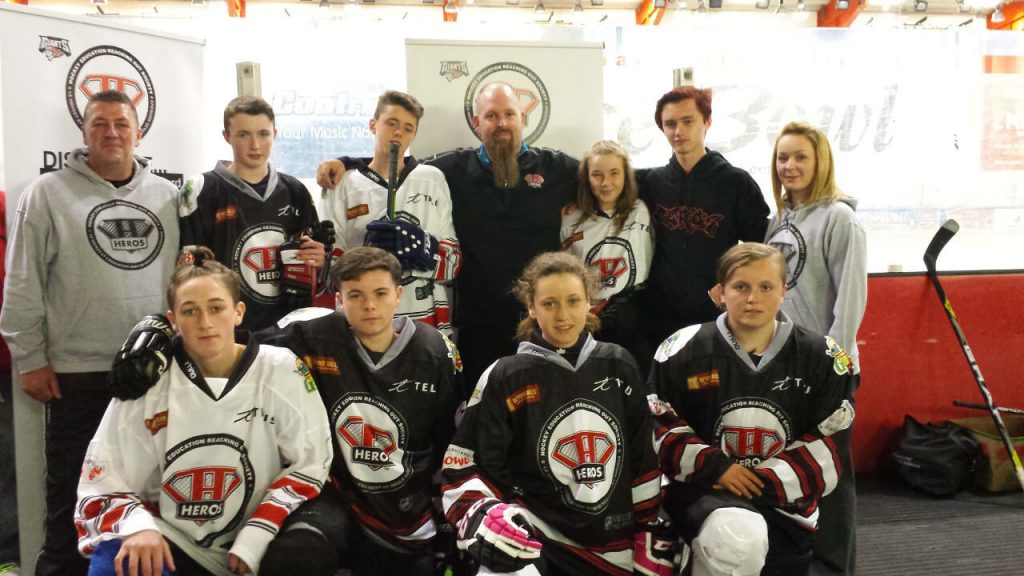 Hockey Education Reaching Out Society (HEROS) is a Canadian based foundation whose mission is to use the game of ice hockey to teach life-skills and empower at risk youth. Founded in Vancouver, Canada in 2000, HEROS provides free ice hockey programming for at risk youth, offering a safe and stable environment for young people to succeed, experiment and connect. HEROS programs provide youth a “team for life” by celebrating in their first goal on the ice and assisting in their dreams off the ice. HEROS educates youth of all backgrounds; providing opportunities for development, scholarship and personal success while focusing on four fundamental behaviours: Respect, Listening, Discipline and Having Fun.

The programme is led in Canada by Norm Flynn and Kevin Hodges and in Belfast by Louise Little who brought the HEROS to the Island of Ireland with the assistance of the Belfast Giants 8 years ago. HEROS in Ireland is a Cross-Border / Cross-Community programme which brings together young people from several communities in an environment which helps to promote development and inclusion, as well as embracing the 4 HEROS Behaviours. There are a number of partner organisations involved in HEROS in Ireland and they include; Beyond Walls, Crosscare, Ballynafeigh Community Development Association, British Army Welfare Service, Belfast Giants and the Flying Ducks. The HEROS annual programme is conducted in two phases; the residential weekend in Glendalough, County Wicklow and a week-long ice hockey camp held in Belfast Northern Ireland.
Prior to the merger of Flyers Ice Hockey Club and the Dublin Ducks the HEROS programme was attended by members of the Ducks over a number of years. Since the two teams have merged 2015 was the first year where the Flying Ducks took part. HEROS operates under 3 levels; Junior HERO, Senior HERO and Leaders. This year the Flying Ducks were fortunate to send forward a total of 11 people; 2 Leaders, 1 Senior HERO and 8 Junior HEROS.

On a weekend in June the groups from Belfast and Dublin met at The Den in Finglas where the HEROS boarded busses and coaches to Glendalough for 2 overnights in the newly refurbished Crosscare facilities. The 2 houses which would be home to the HEROS could only be described as idyllic. The HEROS were assigned rooms based on gender and age and the facilities within the houses were second to none. The HEROS got settled in on the first night and undertook initial presentations related to their expected behaviour, including their agreement to abide by their HEROS contract. The contract provided all of the HEROS and Leaders with guidance in relation to what was and was not permitted.
During the weekend the HEROS undertook a variety of activities, including Coasteering, Abseiling, Climbing, Trekking, Team Building Exercises and team challenges. The HEROS were sorted into their teams and they gained points for good behaviour and undertaking positive actions. On the other hand, points were deducted for inappropriate behaviour. We are delighted to report that the majority of the points awarded during the weekend were on the positive side.
Each evening the Leaders sat and discussed the day’s events and noted any positive and negative points of note. The HEROS undertook Reflection each evening which was very beneficial from a team building point of view.
It would be remiss of the club not to mention as special word of thanks to Crosscare for the use of the houses. The HEROS were the very first young people to use the houses since substantial decoration was undertaken. The handover of the house went very well and indeed the HEROS were complimented on the condition of the house after over 60 people had stayed for 2 nights. Before we knew it the groups were heading back to Dublin and Belfast.

A huge thank you must go to all of the Leaders from each of the partners North and South of the border and across the Pond. The entire Leadership crew from each of the partner groups, the staff at the Ulster Folk and Transport Museum, everyone at Palace Barracks, Dundonald Ice Bowl and everyone who assisted in making HEROS 2015 a huge success. The bags have long been unpacked but what is clear is that lifelong relationships and friendships have been formed. HEROS have succeeded again in bringing their wonderful programme to Ireland for another year.
A very big thank you to Sarah, Garrett, Conor, Abigail, Megan, Niamh, Mark, Paddy and Daragh for representing the Flying Ducks so well. You can all be very proud of your achievements.
Finally, thank you to Norm, Kevin, Justin, Mark and Tracey for coming all the way from Canada to deliver the HEROS programme to our children. It is greatly appreciated.