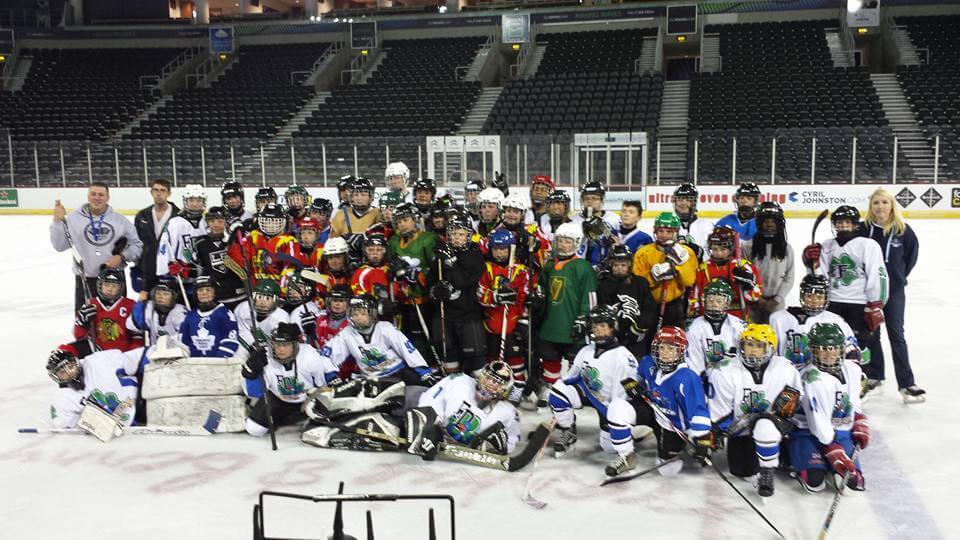 It was dark and cold at 6.30am on a rainy Saturday morning when our intrepid local heroes started to arrive. Full of smiles and excitement, despite the early start, they board the coach bound for Belfast. The Flying Ducks, our local Ice Hockey team, are off for their very first training session on ice for the new season. We cross the Border and then we are here, the excitement is palpable as the mountains of gear is unloaded outside the SSE Arena, home of the famous Belfast Giants Professional Ice Hockey Team.

As we enter the Arena, a hush descends, the Giants are training on the ice in preparation for tonight’s big game against the Sheffield Steelers and the children look on awestruck. Then it’s time to get kitted up for the first training session, as some of the children are due to train with the Irish Development Squad, in preparation to represent their Country in Boston, Toronto and Iceland in the New Year. Cheered on by their Flying Ducks Team mates, they work so hard and do us proud. Then it’s time for the entire Team to hit the ice and off they go, flying around the ice, twisting and turning at breakneck speed, manoeuvring the pucks with precision. The sight of them takes your breath away. They have lost none of their skills despite the fact that from April to October they have no ice to train on because of the lack of a permanent ice rink. Despite this, their dedication keeps them training all year round as they move on to inline roller blades for training at the great facility that is Mountview Sports Centre.

They continue to train to the point of exhaustion, each and every member, from 4 years old to 18, pushing as hard as they can, getting every bit of enjoyment out of their chance on the ice. Then its time for a bite to eat and the excitement begins to mount again, it is almost time for the big game. The children sit in the stands, they cheer on the Belfast Giants until they are hoarse. They sing and dance their hearts out and imagine that it could one day be them on the ice, with thousands watching, as they hit the puck past the Goal Tender.

Its 10.00pm now and the children stand on the foot path as the gear is loaded on the coach for the homeward trip. As the coach pulls away we spot them, a few of the Belfast Giants are exciting the building and the children wave and shout. After such a long day, filled with hard work and excitement, you could expect to hear snoring all the way back to Dublin. Not the case with the Flying Ducks, as they talk about the day and make plans looking forward to the next ice training sessions even though they know it will mean hard work and very early mornings in the midst of winter. Despite this, they are always laughing, always a Team, always heroes and Giants in their own right.